What exactly is a home study??

Before our adoption journey began I assumed it was a really scary home visit where the mean and overly critical social worker walked around with a white glove inspecting my baseboards and ceiling fans. Can I just say that, WOW, we would have failed. Also, I'm happy to say that Social Worker Kelly was neither mean nor overly critical. She wasn't the least bit intimidating! Ahhh, Malerie's fears relieved.

I learned that a home study is actually a document written by the social worker after many meetings/interviews with the family, stating his or her recommendation of the couple for adoption. 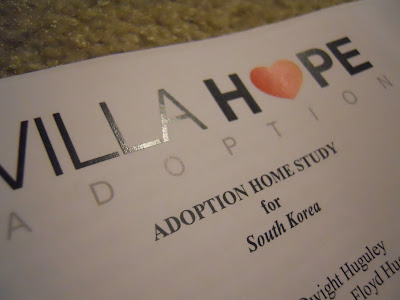 The interviews are quite in-depth, mostly about your personal life, such as schooling, discipline, childhood memories, family values, strengths and weaknesses as a couple, etc. The questions were not difficult, but very detailed.

Before our first interview I was nervous to get Gia's bedroom started. I just knew that would jinx us. Turns out, we passed! 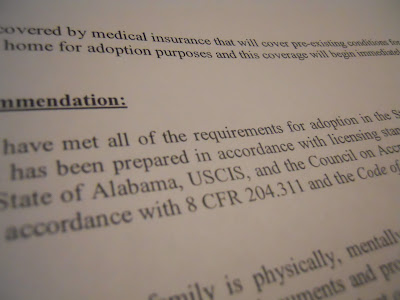 All our friends assured us that we'd be fine, but until this Type A control freak experienced it, I found those words empty.

Now that our home study is officially complete, we have been moved to the Korea program in Holt. I'm not 100% sure about what that means right now. I'm getting emails only from the Korea coordinators, so that's a change. From what I can gather, we are now working with the people at Holt that are in direct contact with Korea's Holt office. Cool! I'm learning of fee changes and travel expectations....scary and overwhelming, by the way. We also now have access to the Families in Process site. When I have a day where I can sit and breath again (b-u-s-y) I'll check it out more. It seems to be a resource where other adoptive families are networking with one another. Maybe I'll learn some fundraising techniques, Lord knows I need them.

Speaking of, we had to move the first annual Orphan Run 5K (sponsored by Christ City Church) to March 24. Be on the lookout for more information.
I'm thinking of having another yard sale too. The other one was so successful, even if it did almost send us to the looney bin. That won't be until the spring, if we decide to do it.

I'm about to start organizing a Christmas fundraiser that will be awesome. I'm offering my Christmas shopping services for anyone who doesn't like getting out in the holiday traffic. Kevin and I always finish our shopping before December, but we still drive out to the mall late at night just to be part of the hustle and bustle. (Don't you just love using hustle and bustle when referring to Christmas?? It just fits!) I haven't nailed down all the details, but I'll probably be charging 15% of the total receipt. Let me know if you're interested or know someone else that may be.

Oh, and we have ordered more smalls and mediums in our adoption shirts. Let the ordering begin!