I was born a product of the 80s. My parents, which I describe as Jesus-loving hippies, brought me up on classic rock for the most part, and being from Alabama, I was a rare breed in the sense that the only country artist I remember us listening to on a semi-regular basis was Johnny Cash. As I grew into the adolescence of my teenage years, I found myself falling in love with the alt-rock station in our city known as "The X" (formerly, "The Bear"). This was largely given to the fact that I'm a baby of three boys, so rock music stayed on constant in our house and in our vehicles, though as rock evolved, it was the 90s alternative that influenced my love for music more than any other genre. Most influential were the songs and sounds from collaboration records like, "Live in the X Lounge."

Fast forward going on twenty years, I reminisce about the days and the bands of my youth such as Weezer, Third Eye Blind, Oasis, Matchbox 20, Counting Crows and others. Living even today as a full time musician, I still reflect on my high school days where we left the windows down and the music blaring, so that the back roads of Alabama became the perfect audience to the soundtrack of our lives.

This next week, I get to pull some personal ammunition (relationships) together to recreate the music of our high school car stereos. With some of my really close friends that just so happen to be some of the best musicians and live production professionals in our part of the country, we will celebrate on June 6th in Birmingham the musical decade of the 90s, all in hopes to help bring our daughter home from South Korea. Consider this my personal invitation to a night you don't want to miss... the very first performance from Pop Goes The 90s. Join us, and let your $10 cover charge help us bring Gia home. 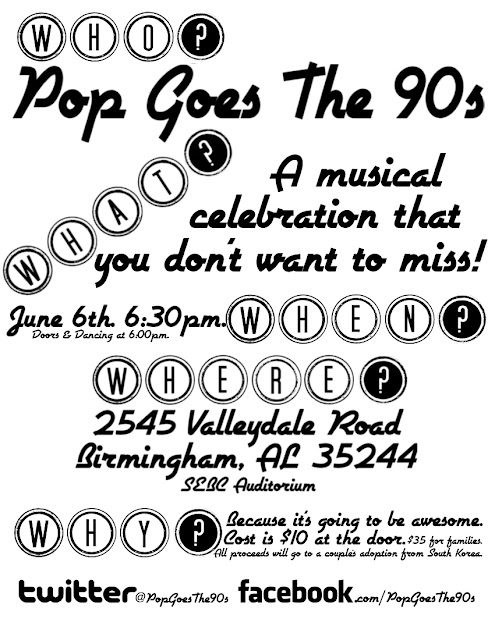